One for the Road... Fat-Washing

In "One for the Road", one of the guys takes a quick run at a topic for your reading pleasure. Themes will vary, from classic drinks to hand-crafted ingredients and creations of their own, or whatever suits them at the moment. This go around, Pablo delves into a topic befitting his physique: fat-washing.

A couple of years back John wrote about one of my favorite drinks: the Boulevardier. A lesser known but fantastic cousin to the Negroni, where bourbon or rye substitutes for the gin in approximately equal parts, depending on your taste, with Campari and sweet vermouth.

Fat-washing isn't new and while I've tried it previously I never really gave it much thought. I mean, if there's bacon sizzling in the pan, I'm focused on shoving that into my mouth. However, last night I threw on some bacon to just have on hand  and when it was done and the fat was still in its beautiful, golden, liquid form, I thought I should try to fat-wash... something.

Essentially fat-washing is an infusion, capturing the fat's flavor traits in the spirit itself, without really affecting the mouth feel (or calorie count, if you're worried about such things--if you see me, clearly I'm not). There's a great piece behind the science of fat-washing on Serious Eats. Some common fats I've read about are bacon (with bourbon, perhaps the most popular combo), brown butter (and rum), sesame oil, and then there are variations or luxury versions using duck fat or foie gras, both of which really get my mouth watering, but rarely have at my immediate disposal.

Anyway, before the fat started to solidify I rummaged through my bar to find a spirit to test out. I had done bacon and bourbon last time and wanted something new; rather than settling on a bourbon, rye, or gin, the Campari caught my eye. It wasn't an obvious match but thinking it through after the fact I was hoping that the bitter, herbal, fruity, and orange would meld with the salty, smokey bacon notes. After 24 hours the fat was completely solid on top. I punched a couple of holes into the fat and poured out the Campari into a coffee filter and set it aside but immediately you could smell the bacon aroma on top of the Campari. 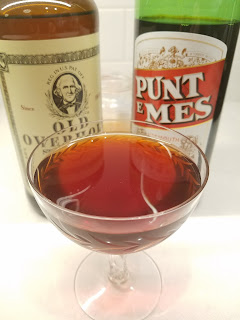 As foreshadowed above, I started with a Boulevardier (Boule-lard-ier?) using closer to the original/classical proportions:
I love Old Overholt and have come to rely on it as a steady regular in my bar--it's smooth, flavorful, without being overbearing. The Punt e Mes was the lightest sweet vermouth I had--I know, there are worse problems to have. And then the Campari... it of course retained all its usual notes but it also added the bacon flavor in a nice, subtle way; there was a hint of smokiness and saltiness but less than I thought based on how noticeable the bacon scent was. 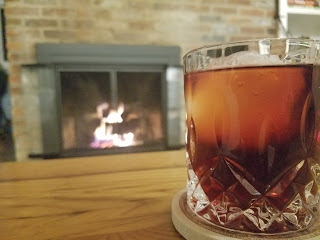 For the sake of science and our tens of readers I also made a Negroni with the fat-washed Campari--the Negroni of course being the best known vehicle for the Campari. I loved the fat-washed Campari here. Also I'm very much over writing "fat-washed." I love a Negroni anyway, in particular in the spring and summer, but once the temps drop I usually shelve it for more seasonally "appropriate" cocktails but the slight variation in this version from the bacon makes it perfect for those fall days around a fire pit or in this case, the end of winter days in front of a fire. The herbal, the bitter, the sweet, already play perfectly together but to have that bacon note at the end of each sip really gives it that comfort food feel.
at 5:04 AM