One for the Cup

Stanley Cup Champion Washington Capitals (not the last time you'll see this phrase here). Yowzers. For those of us who care about such things, it was a release 43 years in the making. It was a cathartic experience that inexplicably made hundreds of thousands of people in streets, bars, and homes across the DC-Maryland-Virginia area suddenly cry out in joy, "is it just me or is it dusty in here?" For others, it was a great introduction to the game of hockey.

Crazy as it was to witness the Stanley Cup Champion Washington Capitals win the thing, the party that followed was, basically, nuts. It raged for days, from Vegas to the Georgetown Waterfront, from Nationals Park to Constitution Avenue, with several stops in between. It was glorious.

The A&T gang watched on over the following weeks, albeit some more closely than others. We rejoiced in seeing the Caps continue the time honored tradition of consuming any number of goodies, liquid and otherwise, out of the Cup. When Stanley Cup Champion Washington Capitals Video Coach Brett Leonhardt turned the Cup into a giant Margarita machine, well, we felt inspired.

So without further ado, here's what the A&T guys would drink out of the Stanley Cup!

Pablo: At over two gallons and nearly 300 ounces, there's enough space in the top bowl for, conservatively, 50-60 cocktails. The real question, though, is how best to honor the players for this achievement, finally, but also DC fans who have waited this long to see the Washington Capitals as the Stanley Cup Champions?

John: Oh, oh, I'll start! Without question, I would fill Lord Stanley with Sydney Crosby's tears. That's right, two gallons of Sniveling Sid's sweet, sweet tears. He'll have to legally change his name to Scott Tenorman once we're done. To balance out the sweetness and give it a little added kick I suppose you could throw in some gin and lemon juice. That would be totally optional, though.

Pablo: Hmm, I suppose that's better than the blood of my enemies... I was thinking something more classic.

John: Oh. That would be more dignified, I guess.

David: Wait... did Sydney Crosby hit more home runs than anyone else?

Pablo: Obviously, you're not a golfer.

David: Regardless whether it's that and not touchdowns I'm thinking of, I'd go for something red. Yeah, red. That rings a bell, something to do with... something. To do with this. A Negroni, for example. Not to mention that it's part bitter, to commemorate the 43 years of pain and hardship; part sweet, to commemorate the victorious scoring of more baskets than the other team; and part gin, because... gin.

For me, the Campari is integral just for the color, although if you don't care so much about that point, Cynar - which is also bitter, but has a really earthy and artichoke tone - can replace it and make it a bit more layered. For the sweet vermouth, I like Dolin, because I have standards. This, however, is one of the few drinks where I'm less picky about the gin, because the strength of the other two ingredients tends to overpower. Go for bog-standard Bombay, which is awesome and underrated in this day of the craft-distilled, the new-world and the small batch, and call it a day.

John: Not only did Crosby not hit any home runs this season, he also threw out exactly two fewer opening pitches than Stanley Cup and Conn Smythe Winner Alexander "Oh Captain, My Captain" Ovechkin did this past June. While your knowledge of hockey is abysmal, David, your choice of drink is an excellent one. 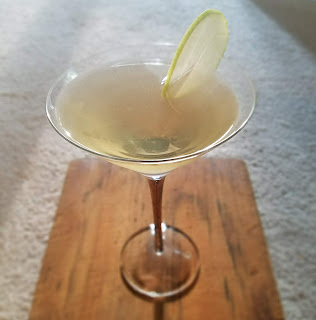 Pablo: I was initially impressed that David even knew who Crosby is until I realized John just mentioned him immediately before. In one of the infinite universes where I am on the Stanley Cup Champions Washington Capitals team, I'd personally go the route of a Perfect Manhattan or Vieux Carré. Hmm... or something with gin. Yes, definitely gin. In this world, though, I think a Vesper would best get the job done. 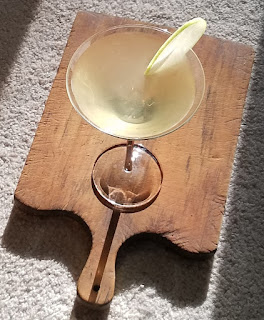 Originally James Bond ordered the Vesper a la, "Three measures of Gordon's; one of vodka; half a measure of Kina Lillet. Shake it over ice, and add a thin slice of lemon peel." I wanted to go with something gin heavy to really pay homage to the team and their huge accomplishment since gin is such a diverse spirit found nearly everywhere, and is particularly popular across Europe. I opted to replace Gordon's with DC's own Green Hat gin, of course, in particular their Fall/Winter Ginavit--with strong notes of not only juniper but of caraway. The aquavit notes are also a nice nod to Lars Eller, who is not only the first Dane to win the Cup, but also the man who knocked in the game-winning/Cup-winning shot. The vodka works well here paying tribute to not only Captain Alex Ovechkin but also the other Russian players on the squad and the KHL. To shake things up, figuratively and literally in this case, I used a fennel tincture to add a bit of depth and complement the gin. On top of that I added a few dashes of lavender bitters and garnished with an apple to bring all the pieces together. 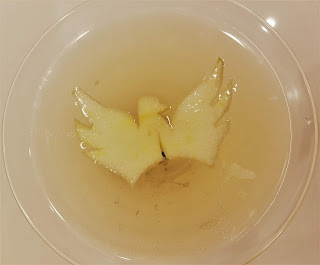 John: Pablo, your garnish game is on point, as always.

Like David, I really wanted to emphasize the color red in honor of the Rock the Red era that Ovie helped usher in. In a nod to the types of beverages more traditionally consumed out of the Cup, I also wanted to add a little effervescence to the party. I figured cutting the alcohol level with something like sparkling wine would also help reduce the number of fatalities that might ensue from drinking 2 gallons of a standard cocktail. Last but not least, I was keen to limit the drink to three ingredient, an homage of sorts to the three stars on the Caps' current jerseys, which are themselves a reference to the District, Maryland and Virginia areas that have supported the Caps all these years.

What could possibly fit this bill? Well, roughly a century ago, the Americano gave way to the Negroni. More recently, at the Milanese Bar Basso, the Negroni begat the Negroni Sbagliato. Translated roughly as "mistaken" or "amiss", the Sbagliato was allegedly created when a bartender mistakenly grabbed a bottle of Prosecco instead of gin, thus returning the Negroni to it's lighter, bubblier origins. Not only is the drink delicious, it seems uniquely fitting that one created by mistake be raised in honor of the 2018 edition (and Stanley Cup Champions) of the Washington Capitals, who were more an afterthought than favorite at the start of the year after failing to take advantage of their "two year window" to win the Cup in past seasons.

So, in recognition of a Caps team that unexpectedly but oh so joyfully brought the Cup home, I give you Sbagliato Babes:

Combine 1oz Campari and 1oz Capitoline Rosé in an old fashioned glass (a thematically-appropriate coffee mug is also an acceptable vessel) over a large block of ice and give it a good stir. Then add 3oz sparking wine and give it a quick, gentle stir; I used a South African MCC Brut because the wait for the Cup felt like it took roughly 1,200 years. If you feel inclined to add some grapefruit bitters, it certainly won't hurt. Enjoy while reminiscing about Ovie and the gang exorcising their demons and beating John Tortorella, Sidney Crosby and the Deadguins, Chris Kunitz and the Tampa Bay Rangers, and Marc-André Fleury and his Vegas Vaudevillians on their way to finally hoisting the Cup. Or, if you actually have access to said Cup, multiply the recipe by about 50 and find a few friends to do Cup stands with you.