A Celebration of The Dude... by three dudes

March 6 is a special day of the year for the guys here at A&T. For it was on this day (or thereabouts), twenty years and a few acid flashbacks ago, that the world first met The Dude. Or El Duderino, if you're not into the whole brevity thing. As with most great works of art, the film in question was not appreciated immediately upon release (perhaps a source of subconscious inspiration for the drinks that follow). Over time, however, it has evolved from a late-night, dorm room classic to a national treasure. No, seriously - in 2014 the Library of Congress selected it to be added to the National Film Registry for its cultural, historical, or aesthetic significance. While that's just, like, their opinion, man, we get it. So today, on the Day of the Dude, we honor The Big Lebowski.


In the past we've honored the day by re-posting David's original write up on the Dude's beverage of choice, the White Russian. While that post and the drink deserve a look on this hallowed day, in honor of The Big Lebowski's big 2-0, the guys decided to take a crack at crafting original cocktails inspired by the Dude and his compadres. And no, none of these fine drinks are made with cannabis tinctures or bitters. Sorry guys.


With that out of the way, we invite you to pull up a seat at the bar (careful, it might bite), mix a White Russian or crack open your favorite sarsaparilla, and drop on in to see what condition our condition is in. If you abide, we're sure you'll enjoy yourself.

PABLO: Coming up with cocktail names is the easy part, what it encompasses and how it represents the cast is a little more challenging, but I knew right away I wanted to give a nod to Jesus. I mean the Jesus. For someone who has as little screen time as Quintana, he certainly makes an impact--you can't mention The Dude, Walter, or Donny without having to throw in a "Nobody fucks with the Jesus!" Sure, he has a checkered past, having spent time in Chino for being a pederast and all, but on those lanes, that creep can roll. So in homage to Quintana, I created "That Creep Can Roll".

With the Jesus in mind, I knew at least two elements had to be there: first, with a name like Jesus Quintana I knew I wanted the base to be Havana Club; and, second, the color had to really honor his bowling jumpsuit--I immediately thought Creme de Violette (in lieu of beet simple syrup and Falernum), but maybe next time.

Immediately this drink is more complicated and with way too many ingredients than certainly The Dude would prefer, but we're talking about Quintana and I think he'd approve. That being said, you can actually taste all the distinct flavors. It comes out a pink-purplish color with the rum coming through first and then getting the other flavors on the back end--the heat from the vodka, the earthiness from the beet, the tartness from the lemon, and the sweetness of the Falernum. The egg white isn't necessary but it really brings the drink together and would suit the Jesus.

JOHN: I'll be honest, I was at a bit of a loss when we first broached the subject of this post. Aside from White Russians, lane-side Miller Genuine Drafts, or a toke from a bowling pin pipe, there doesn't seem to be much variance in the Dude's choice of poison. So I opted to draw inspiration from some of the peripheral players found in the film and ended up, circuitiously, with the "Yes, Yes."

Around the time we first started talking about posting an homage to the film, I also happened across an exceptionally tasty chilli gin from Ginifer, of the Johannesburg-based Angel Heart Distillery. I immediately made the connection with Flea, Peter Stormare/Karl Hungus' celluloid partner in nihilism and extortion, and the world famous bassist for the Red Hot Chili Peppers (get it? chilli gin... chili peppers? Yes? Yes.).

The leather clad, German nihilists in turn led me to a bottle of Sau-Schwanzl-Beiber, a German-made "Liqueur from noble herbs" (thanks Google Translate!) that I picked up at a Secret Santa party a year ago. It reminded me ever so slightly of Green Chartreuse, upon which I immediately realized I was halfway to a Lebowski-inspired Last Word. So why "Yes, Yes"? Consider this drink a paler, slightly sweeter, and more naive imitation of the Last Word, just as Philip Seymour Hoffman's Brandt is to Mr. Lebowski himself.

Switch out lime juice and Maraschino for lemon juice and Frangelico (a quasi-nod to our Kahlua-soaked hero), and you've got yourself a beverage... I won't say a cocktail, cause what's a cocktail? But a beverage, and I'm talking about the "Yes, Yes" here, a beverage that, well, it's the beverage for this time and post. It fits right in there. And that's the "Yes, Yes", on the A&T blog.


Combine the ingredients with ice and shake/stir with a finger, then strain into an old fashioned glass and garnish with a lemon wheel. Or use whatever glass you have on hand and skip the garnish. And, you know, take it easy.

DAVID: Right. So in fine Dude-ish fashion, it took a while for this to tie together. I blame the World Bank, the Court of Master Sommeliers and a particularly raucous game of Cards Against Humanity on Saturday night. In no particular order. Basically, there were a lot of ins and outs, a lot of what-have-yous, and then for a while I was stuck on trying to design a "3000 Years of Beautiful History" cocktail, but Manishevitz does not make for a good ingredient. Trust me on this. I'll try again later, maybe involving something local from the hometowns of Moses and Sandy Koufax.

In the meantime, however, I definitely didn't want to do just another White Russian--all due respect to His Dudeness, there's only so much you can do with that drink--but I did want to tip a hat to it again. So in that spirit (see what I did there?), I give you Donny, You're Out of Your Element!

This is sort of a three-way hat-tipping. First, it is a White Russian, shotified instead of in its natural lowball-on-the-rocks element. Second, layered drinks--especially shots--had a bit of a heyday back in the Nineties, when our favorite movie debuted, so rather than mix this per normal, I've layered the Kahlua, milk and vodka.

Parenthetically, although some of you out there may send nasty-grams over this, it really doesn't matter which vodka you use. We now know this definitively because science, although if you do enough soul-searching I think you'll find we all knew it already anyway. Not to lay too much smackdown if you do have a favorite vodka... say what you want, at least it's an ethos!

Third, in honor of Donny, who loved bowling, the glass is rimmed with ash. Before anyone freaks out, it's just charred toast, nothing macabre--and actually it adds a nice touch to the drink. The crux of my problem with White Russians is that they're overly sweet, not much to the taste of a guy who goes first and foremost for every bitter thing in sight. The charred toast, however, provides a slight earthy bite that offsets the otherwise sweet ingredients.

It, uh... really ties the drink together. 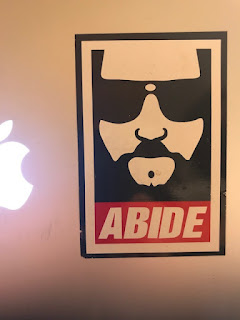 This post was written on a Dude-approved laptop.
at 7:27 AM