One for the Road... Now they call me Mr. Bitterness

In "One for the Road", one of the guys takes a quick run at a topic for your reading pleasure. Themes will vary, from classic drinks to hand-crafted ingredients and creations of their own, or whatever suits them at the moment. This go around, Pablo delves into a topic befitting his personality: bitters.

A few years ago Gabriella Mlynarczyk said (not to me, in an interview) that “technically, in the classic cocktail world, a cocktail is not a cocktail unless it contains bitters. If you don’t add bitters, you can taste something missing. They add this final kind of balance that brings everything together–like the glue.”

Like so many others, for a long time the only bitters I had in my kitchen were Angostura Bitters--they went in a Manhattans, the Old Fashioned, the Martinez... they added that extra depth of flavor. Little by little I started paying more attention to other, non-Angostura bitters being used by friends and bars in not only other cocktails but also a Manhattan, the Old Fashioned, and the Martinez. It wasn't long after where, according to my wife, I went off the deep end with bitters--apparently I don't need dozens of varieties. I respectfully disagree(d). Hence... 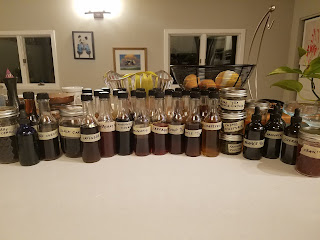 I picked up Brad Parsons' Bitters book and began reading about the history of bitters, the must haves, their near extinction, their resurgence, the best cocktails to showcase them, and most importantly, how to make your own.

But first a quick note about bitters' cousin: tinctures. Bitters are not tinctures; tinctures are more of a one-trick pony but certainly have a place in cocktails--tinctures are an extract of a specific ingredient to highlight that flavor and/or aroma. A rosemary tincture for example is just a matter of infusing fresh rosemary into a few ounces of high proof alcohol for a few days. Once you strain out the rosemary you're left with a green, rosemary flavored and scented extract, which I tend to use with citrus-forward gin martinis or shrub cocktails. But I haven't ventured too far down the tincture path really.

So, shrubs... no wait, back to bitters. Bitters are non-potable, meaning you won't drink them on their own. On paper bitters are very basic:
Once you look at the range of possible ingredients in any of those categories the complexity and possibilities begin to really shine through. The flavoring agent is pretty straightforward and doesn't have to be singular. They can be combinations of fruits, spices, herbs, and nuts. You can find fruit forward bitters like orange, lemon, cherry, apple, grapefruit. There are also herbal and botanical options: celery, hibiscus, rosehip, and lavender. And then there are bitters that make you think that they "were so preoccupied with whether or not they could that they didn't stop to think if they should." Some of the more common spices I use are cardamom (green and black), all spice berries, star anise, cinnamon, lemongrass, and whole peppercorns (and not just black). A bitters recipe will usually include a combination of fruit flavors combined with spices.

And then there are the bittering agents, which also have specific flavor or aromatic qualities, and which will, that's right, provide bitterness and bring all the ingredients together. Part of my going off the deep end I mentioned earlier meant investing in various bitters in part by leafing through Parsons' book to see what his recipes called for as well as others I found online. Part of my collection now includes: angelica root, barberry root, black walnut leaf, burdock root, cinchona bark, citrus peel (notably orange and lemon), dandelion root, devil's club root, gentian root, licorice root, orris root, quassia bark, sarsaparilla, wild cherry bark, wormwood, and more. The flavor profiles between some bitter ingredients can be very subtle and others more obvious. In general what I tend to do when I get a new ingredient is what I assume a chef would do, take a piece and pop it into my mouth and figure out how it tastes to me and how best to capture and complement that flavor in recipes. Alternatively you could steep some in a tea or make a tincture to extract the flavor. The most common agents I use are quassia, angelica root, gentian root, and wormwood. In some cases I arbitrarily swap some out for others. However, in some cases it'd be difficult to find a substitute; for example, cinchona bark contains quinine, which is what's used to make tonic water, and is pretty unique in that aspect. Otherwise trying these ingredients is a matter of trial and error.

Most mixologists agree that whatever base you use, which has to do with the flavor profile you're building, should be at least 100 proof; I tend to use Smirnoff Vodka 100 proof, but also have Everclear, Cruzan 151 Rum, and Wild Turkey 101 on hand. More often than not I'm using vodka or Everclear since it's a neutral base and the bitters flavor itself is highlighted.

So once you have all the ingredients, then what? A lot of recipes in Parsons' book call for a quart-sized jar and two cups of high proof alcohol. When I'm trying my own recipes I start way smaller usually using one to one and half cups of high proof alcohol. I write down every recipe so I know what to adjust in the future. Keep in mind that every recipe takes about three weeks from start to finish.

After getting all your ingredients into a jar it's mostly hands off from there. Store in a dark, cool place and shake daily for two weeks. After two weeks, strain the solids from the liquid using cheesecloth. Save the liquid and strain again (and again and again) until you've gotten as much sediment out as possible. Then take the solids and put them into a pot, cover with water, bring to a boil and then drop it down to a simmer for 10 minutes, and then let cool completely. Put the pot contents back into a jar, store, and again shake daily. After another week, strain the solids and toss them and, little by little add some to the original extracted liquid. What you're doing here is cutting down the proof and keeping the flavor without diluting it. In some cases, if it's too strong, too bitter, you can add simple syrup to the mix.

When sampling bitters the proper etiquette is to first, as I've been taught, have a few drops put into the palm or on top of your hand, rub your hands together together, almost like you're testing cologne or perfume, and smell. To taste it, I'm not sure what proper protocol is but I typically either put a few drops directly into my mouth because I was raised by wolves, or put some into a spoon and taste directly. The real taste test is how does it work in a drink.

I tend to test every bitter either in a martini or an Old Fashioned since both cocktails really allow for the bitters to be highlighted. However, every once in a while I'll make a bitter without having a cocktail in mind for it and some trial and error goes into mixing variations, spirits, ratios, to see what works together the best. For example, when I received some beautiful saffron from Afghanistan, enough to make me worry about it going bad, I thought I should try to preserve it in my own unique way hence my attempt at saffron bitters. The first batch were fine, too much saffron, not a lot of depth, not enough bitterness. But with my second batch I added more depth, flavors, and bitterness while still maintaining the saffron's essence. And while nice in a martini in particular, it was David who really highlighted the color and flavor of the saffron bitters in the Graveyard of Empires. 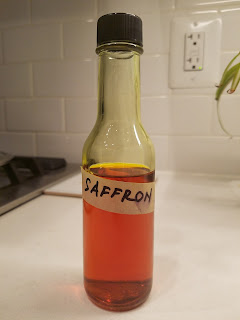 If you happen to have extra saffron laying about try out my (current recipe):

Combine all ingredients into a jar, shake daily for two weeks, strain solids (over and over) and dilute. I know, I know, I'm going against the "standard" process I stated earlier but for this batch I dilute it with filtered water instead of stewing it because there aren't a ton of ingredients to stew really, but also to preserve that beautiful golden orange color.

And all this to say nothing of potable bitters like amaros (e.g. Averna, Rammazzotti) and bitter liqueurs (e.g. Campari, Cynar, Fernet). That'll be for another day.
at 7:17 PM