For Repeal Day, a celebration of creation... sorta. Introducing the Graveyard of Empires 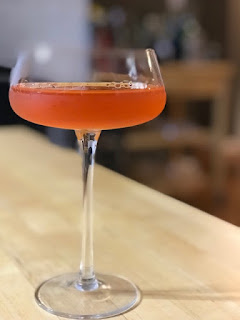 Before anyone starts heating up the righteous indignation, I should point out that this isn't an Afghanistan joke, it's a colonialism joke.

The actual origin of "graveyard of empires" as a nickname for Afghanistan is obscure, but it's not something the Afghans themselves invented--rather it was applied by one colonial power or another in bitter recognition that they had joined the roster of centuries' worth of invaders who had tried and failed to hold on to the country. Most recently the roster has included the British, Soviets and--dare we say it--Americans, but the succession of attempts goes back at least as far as Alexander the Great, long before there was a nation on the map with the name "Afghanistan." Regardless, the political accuracy of the term isn't at issue;

Specifically, Afghan saffron that my wife, who recently returned safely from a year deployed in Kabul, brought back. Beautiful saffron, grown in-country, of a lovely high quality. And in quantities that beggar description, especially if you know what a bitty little container of the stuff goes for here in the US. Enough that I've actually been struggling to figure out what to do with it all before it goes stale.

I know--we should all have such problems, right? Thankfully, we gave some of it to Pablo, our most recent Alchemist, who made the bitters out of it you'll read about presently. Wonderful stuff, those bitters--a balanced aromatic base with an appropriately strong but not overpowering saffron scent and this beautiful fiery color that begged for some specific use that would really showcase it. So began... the Graveyard of Empires.

I've done this drink with a few different base alcohols and while I've settled on gin--partly because I like the flavor and partly because it's an appropriately colonial quaff--it does work with rum as well. Especially if you prefer a slightly sweeter and less edgy drink. If you're following along at home, you may want to do that experimentation because the amount of bitters in here is also far higher than the normal "dash or two." That's on purpose--don't panic. This isn't a knock-one-back sort of drink, it's got a lot more of an edge than that.

So...
2.5 ounces of gin--I like a straight up London Dry for this, which will be cleaner, more straightforward and stronger on the juniper, less floral or herbaceous than some of the New World-style gins. It also calls to mind pith helmets and red-coated troops and monocled Viceroys and the gallant (if ultimately futile) attempt to impose permanence onto the essential ephemerality of politics. Also because the combination of flavors here is powerful enough that it'll tend to overwhelm some of the subtler flavors in higher-end gins, something like a straightforward Bombay wouldn't go amiss--if you want to step it up, I've been using Bluecoat from Pennsylvania recently, which is a) really good and b) adds an extra smirk-to-yourself-at-the-inside-joke value that just never gets old.

The combination of the first two builds a strong bitter base, which is balanced out by the simple syrup--but it also combines into a baleful orange color that brings to mind suns setting on empires, and the ruins of armies. Cinnamon is a good flavor match for saffron, and although it's not exactly "terroir appropriate," infused into the simple syrup it adds a nice depth of flavor and dimensionality to the finished product.

I finish this with a quick squeeze of lemon juice--not a lot, just enough to liven it up a bit.
Because you have simple syrup and a bit of citrus in there, I shake this one rather than stir it. For garnish I used a thin slice of persimmon, which IS terroir-appropriate, and which matches the color beautifully. 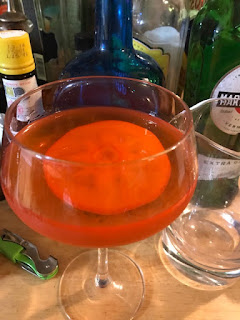 Now. This, like most craft cocktails, is not for everybody. It's strong, and deliberately slightly harsh, although the simple syrup and lemon keep that to a reasonable level. If you'd like to try it but think you might prefer something with a bit less of an edge on it, replace the gin with lightly aged rum. My favorite in this was 3-year old Havana Club, which has just a touch of color--not enough to disrupt that fiery orange you're aiming for, but it's had enough time in wood to smooth it out just slightly.

Rum is an inherently sweet alcohol, so it will play well with the simple syrup. Interestingly you get a good balance out of this... if not for the bitters, you'd need something else to balance out an otherwise over-sweet combination (which is why Daquiris are so heavy on the citrus, for example); with the bitters and the Campari, you get an interplay that's complex and nuanced enough to sit back and dwell on a bit.

If you aren't going through duty-free anytime soon, there are plenty of other options on the market to substitute for the Havana Club. Rum, needless to say, is also an appropriately colonial liquor. Just to reiterate, this isn't so much a drink to kick around at the pool with--it's a little more introspective than that. It has layers that reveal themselves over the course of a long finish, and since using saffron to make bitters out of is an expensive proposition, it's worth breaking out as a once-in-a-while thing.
at 6:10 PM