A week for classics, and a celebration of New Orleanian resilience ten years after Katrina: the Sazerac

In "One for the Road", one of the guys takes a quick run at a topic for your reading pleasure. Themes will vary, from classic drinks to hand-crafted ingredients and creations of their own, or whatever suits them at the moment. This go around, David presents the Sazerac.

Every city has a personality. Like people, some are stronger than others, more complex, more forthright or mysterious, urbane or rustic. Infinite variations given history, and climate, and population... but some cities have a more powerful energy to them. A soul, something beyond and encompassing the combinations of people, buildings and sights that we usually think to describe.

New York, for example, has a frenetic youth about it; a constantly unsatisfied questing energy and a jagged sense of old things transplanted together into a new place and fitting well not because the edges are gone and the shapes meshed, but only because of the commonality of that itch.

New Orleans, on the other hand, is a modern American city with something ancient and feral underneath it. A powerful place--strong enough to hold off the homogenization that's befallen so many big cities. A place that still holds to the most genteel and gracious Southern traditions, as well as failing to shed the weedy violence of race and segregation. It's a city where the oldest restaurants in the United States still ask diners to wear a jacket for dinner, while half a block away a screaming mob of tourists and college kids gets blindly obliterated on a nightly basis.

It's a place of culture, music and one of the world's unique and great cuisines--that latter owing a great deal to the fact that it is also built on a history of colonial violence and a major hub of the Atlantic slave trade. Modern indeed in many ways--and yet all but the most obtuse observer is going to get the strong sense, no matter which of the varied neighborhoods they walk, that age and ghosts and half-remembered gods are a constant presence, felt but unseen. It's a city that can't be described now without being described then.

All of which sounds like an over-the-top introduction to a cocktail, but in addition to its other gifts--Creole and Cajun cuisine, jazz and other such minor contributions to world culture--this city gave us the Sazerac. Especially in recent times, the drink's become a bit of a touchstone. New Orleans takes its traditions seriously, and puts a very high value on continuity as well as resilience and renewal, and the Sazerac has been there through it all. 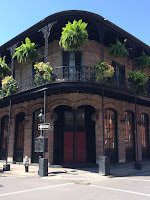 Seriously--this drink has seen the Civil War and the Great Depression, made it unscathed through Prohibition, and survived Hurricane Katrina (which ten years ago this month, had most of the city underwater--now's a particularly fitting time to celebrate survival and continuity!)... and that's just a short list of the stuff that happened on our own soil during its tenure.

All drinks are imbued with some sort of psychological gestalt--which one is best for which sort of mood, which intended effect, etc. Through deep and involved study, which I hope all of you duly appreciate, I've come to the conclusion that the Sazerac is the drink of choice when remaining unflappable and steadfast despite the arrival of barbarians at the gate.

This is one of the first American cocktails, up there with the Old Fashioned (appropriately enough) for age and endurance, and still one of our greats; like the city, a combination of flavors with both a sweetness and a bitter burn in the background. It has its roots in 1838, in Antoine Peychaud's New Orleans-based apothecary--which actually makes perfect sense, since the infusions and bitter mixtures that invariably went into the first generations of cocktails were made by apothecaries, not bartenders. It's now become a staple sipping cocktail, taking its rightful place in the pre-Prohibition pantheon. Its constant youth as a symbol and staple of New Orleans, turned and returned to over the years whenever people were in need of a reminder that things survive, has kept it from getting stale.

Also like that wonderful cocktail, the Old Fashioned, you can call it a "grandpa drink" all you want--but you'd better be tough if you're going more than one round with it.


The basic recipe is thus:
1.5 oz rye or bourbon whiskey
a touch of either absinthe or Herbsaint--more on this in a minute
simple syrup, to taste
Peychaud's bitters. 2-3 dashes would be standard. If you're me, it's more like 8 or 9.

This should be stirred vigorously with ice to chill it, and then served in a lowball glass with a twist of lemon. Easy.

So, a few quick notes on the ingredients...

Sharing New Orleans origins, a "real" Sazerac should only use Peychaud's bitters--the brand is one of the extremely few to have survived the ravages of Prohibition and come out again the other side. I have to say, although I may incur a voodoo doll or two for saying it, I actually prefer my own bitters to Peychaud's... but the deep red color of Peychaud's does add a bit of visual interest to an otherwise "basic brown" drink.

The original recipe called for French brandy--which I admit I haven't tried, but sounds interesting. The usual modern version uses rye, which I prefer slightly to bourbon for its drier and more botanical notes as opposed to the slightly sweeter corn-based bourbon. Here's a fun fact: A&T's other half, John, points out that the Sazerac's shift away from Brandy correlates suspiciously with the mid-19th century Great French Wine Blight, which laid waste to their vineyards and disrupted supply of grape-based spirits worldwide.

Two other fun facts, while we're on the subject: One, the blight was possibly caused by an infestation of phylloxera aphids from (oops) America, although the truth of the matter remains debated. Two, in order to rebuild the destroyed vineyards, most of the French winemakers were forced to graft their surviving vines with (gasp) phylloxera-resistant American rootstock, which by one line of reasoning means there hasn't really been such a thing as "purely French wine" since the mid 1800s. Mentioning either of these points to someone from France is a very efficient way to start a fight.

Back to the subject at hand: you can balance the sweetness/roughness factor by adding more or less simple syrup--less for bourbon to let its other dimensions shine through, and perhaps more for rye, which can often use the balance. In either case, I don't use much: a teaspoonful or less, just a dash. This is a whiskey-based drink and accordingly strong, but the addition of the simple syrup shouldn't be enough to "candy" the drink, just to take the edge off the roughness and put it into sipping territory.

The absinthe-or-herbsaint question is an interesting one, and the simplest answer is of course "go with your taste," and then stand fast and prepare to repel boarders rabid counter-arguments. There's a huge variation in types and brands of absinthe, so it's a bit of a non-starter to approach this question as thought it were as simple as an either/or debate. Herbsaint, on the other hand, is a singular thing--essentially an absinthe-like anise liqueur, almost unheard of outside of Louisiana unless you've got a bar that really knows its stuff, but without the wormwood. It has a thicker mouthfeel than absinthe--not quite syrupy, but certainly a bit more viscous than the norm--a clear emerald green color and a dense, humid, herbaceous quality to it.

Herbsaint made its way into the world largely as a replacement for the now happily re-legalized absinthe. Either one will work for this drink--I strongly recommend making one each way, and drinking them with a friend while having a happy argument over which one worked better. In either case, very little of it goes into the drink itself. Ideally, a small amount is poured into the lowball, swirled to coat the glass (or, if you're particularly coordinated, the glass is tossed into the air and spun hard) and then the excess dumped out. Just a trace remains.

The bitters, rye and simple syrup are then poured into the coated glass. A twist of lemon finishes it up, and there we have it. The sweetness and the bitter should balance just as the smoothness of the whole should balance with the whiskey burn.

Altogether, a civilized drink with something feral behind it.
at 7:39 PM