One for the Road... the Mint Julep.

David here...
Okay, so both John and I have been horribly busy recently, but I'm going to take the opportunity--the Kentucky Derby being tomorrow and all--to squeak one in so we keep things going here, until the next "both-of-us-whistles-and-bells" post. 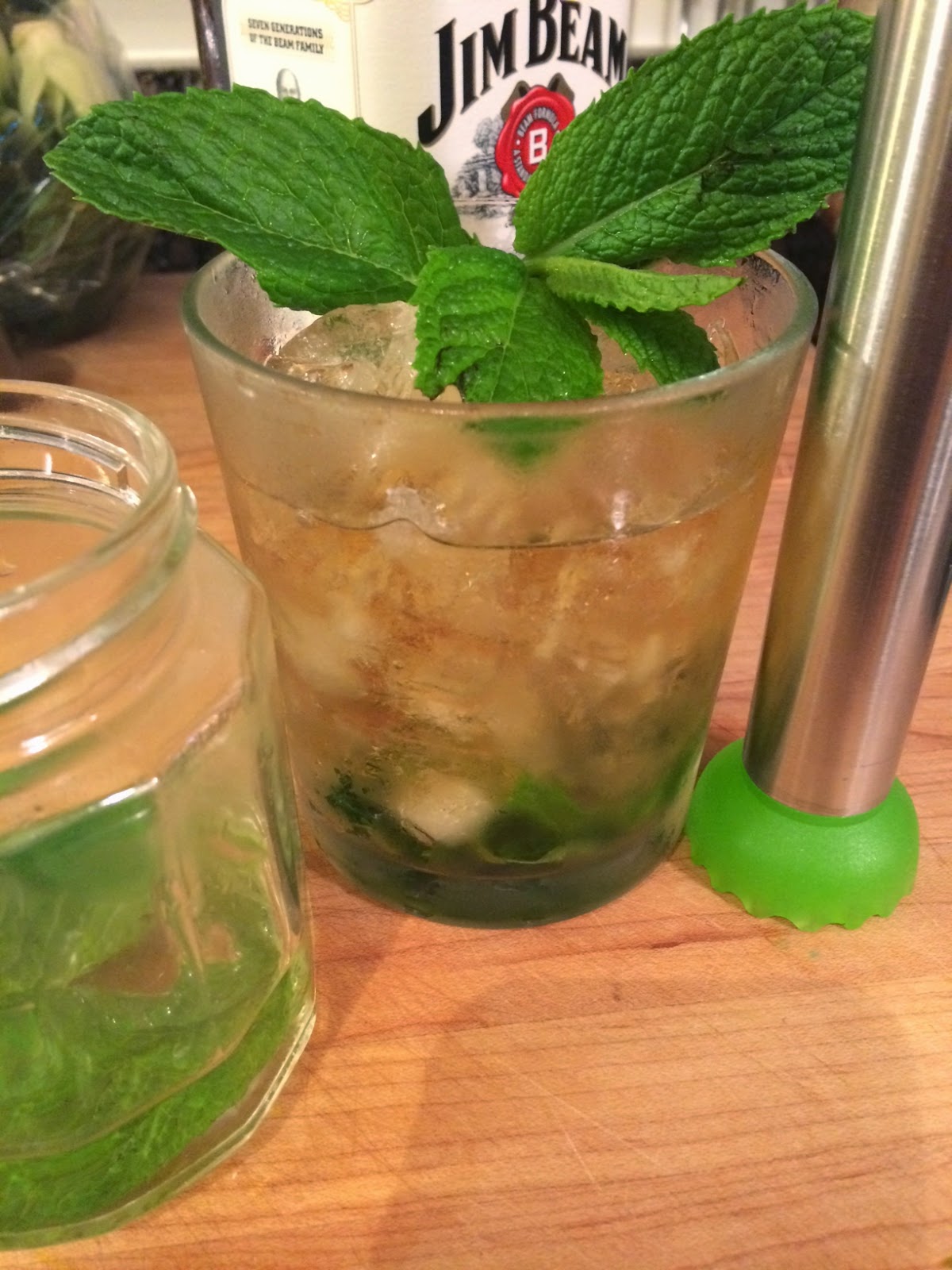 For those of you who don't know what the Kentucky Derby means, it has something to do with horses, lots to do with massive complicated hats, and everything to do with Mint Juleps. This is Southern tradition at its most elegant and genteel--a deceptively simple drink made with bourbon, muddled mint, simple syrup and crushed ice. That's it. For it to reach its fullest potential it really should be that simple--although you'll likely have some urge to mix other things into it, resist it. This is purist heaven.

That said--those SERIOUS among you will no doubt notice that I didn't use a silver cup for this. If you're going to totally snob out you should--but I actually find that the silver makes everything taste metallic. Not the nicest of flavors. Seriously traditional also means sprinkling sugar through it instead of the simple syrup, but since sugar doesn't dissolve well in alcohol, if you want the effect of the sugar, use a simple syrup instead.

So--to make one of these well, you first have to realize that a Mint Julep (like a Martini, in this regard) is a state of mind as much as it is a cocktail. You should be in the South and there should be Spanish Moss somewhere around. It should be hot, the air should smell of cut grass and flowers--spring and summer smells, earth and green things as opposed to the stone and smoke of fall and winter. It should hint of a polite, but utterly immovable refusal to hurry. As long as you can get your head into this kind of space, you're good to go even if you're north of the Mason-Dixon line. For God's sake, whatever you do, don't rush--this is a drink that should be made as a way of getting yourself down to drawling pace, and enjoyed the same way.

First make a simple syrup--this is one of those things that always sounds more complicated than it is, but really I'd recommend having at least one jar of it in your fridge on general principle. A simple syrup is a 1:1 mixture of water and sugar, heated until the sugar dissolves in the water, and then allowed to cool. 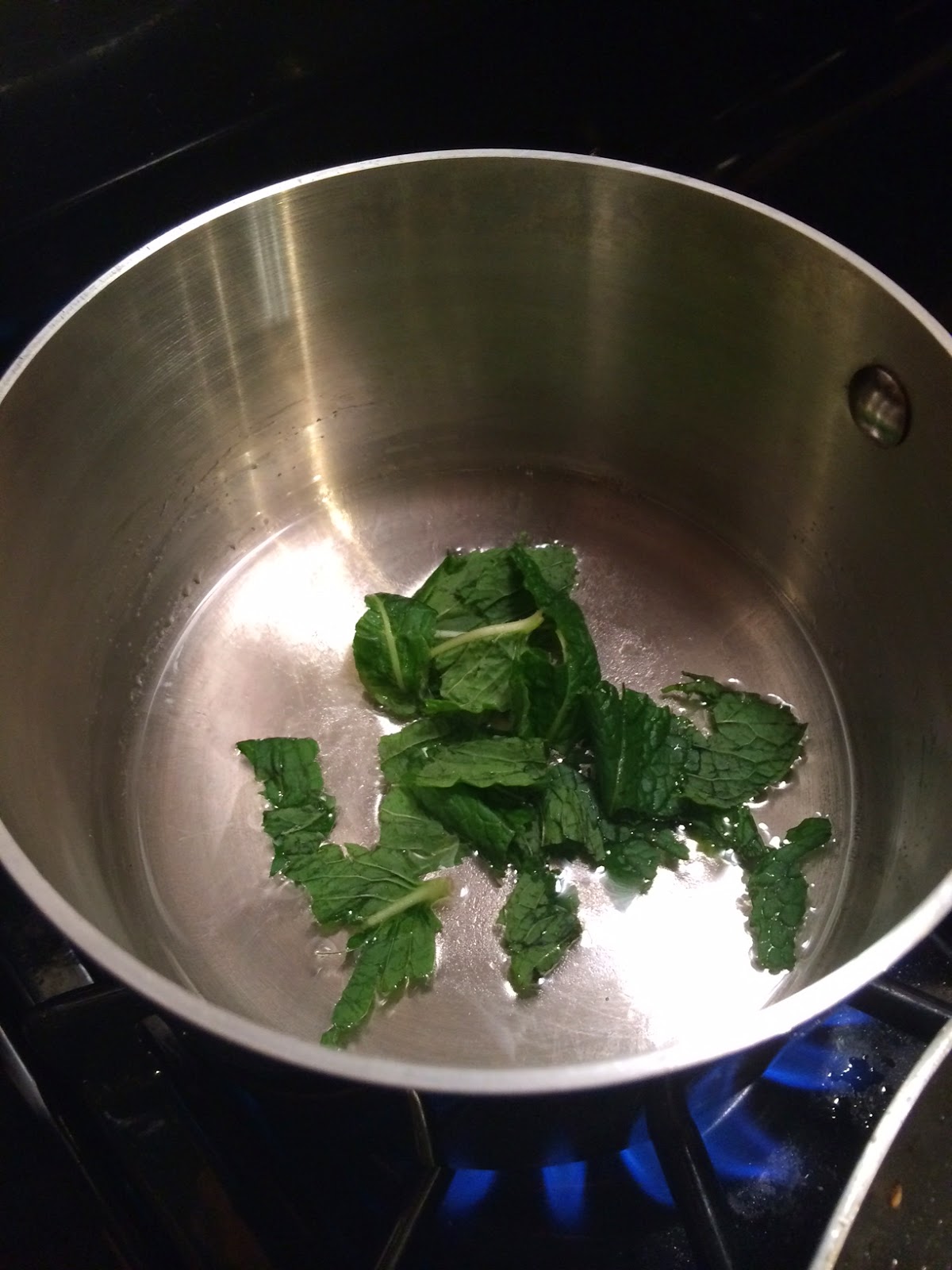 It'll become slightly viscous, and mix completely and instantly into anything. The really wonderful thing about simple syrups is you can infuse them with anything at all. For this, I used--but of course--mint. Depending on my mood or a particular thing I was making, I've used kaffir lime leaves, chiles of various sorts, berries--you name it. Whatever you put in there, throw it in as the sugar gets to the point of dissolving, and then turn off the heat and let it sit until it cools. The longer you let it sit in there the stronger the infusion will be... what I did for this was infuse the mint, cool it, strain the now-unattractive leaves out and the liquid into a jar, then throw some fresh leaves in with it.

Now the good part--the drink itself starts with muddling mint in the bottom of the glass. Basically that's just bruising the leaves with something blunt, so that you release the aromatic oils but don't bruise it to the point of getting black and bitter. Gently. Briefly. A light touch, but decisive--you'll smell it when you do it right, the scent of the mint will carry halfway across the room. I kept the glass itself in the freezer for a while so that was chilled thoroughly, as well--the cold is key, especially since we're going to use crushed ice which melts all too quickly and waters the drink down if you're not careful.

Speaking of the ice--on top of the muddled mint, fill the glass with crushed ice. If you don't have crushed ice on hand, do what I did--put ice cubes in a ziploc bag, seal it and then pound it with a pot. Unsubtle, but it works just fine.

Pour a few spoonfuls of the simple syrup over the ice--this is really to taste, no other way to put it--and then pour the bourbon over that. Mint sprigs for garnish is a beautiful touch, and then that's it. You're done. If you got it right, you'll smell it long before you taste it.

Email ThisBlogThis!Share to TwitterShare to FacebookShare to Pinterest
Labels: Bourbon, Cocktails, Mint, One for the Road, Simple Syrup